2019 is the 100th anniversary of the creation of The Bauhaus. An art and design movement that any lover of Mid Century design should be eternally thankful for. In fact no school of design has been as influential as the Bauhaus.

Founded in Germany in 1919, by architect Walter Gropius, the School of design and architecture only lasted 14 years before it was shut down by the Nazis in 1933. This, however did not dampen the Bauhaus movement, in fact it just propelled it into a modern phenomenon. Many of the Bauhaus' most notable teachers emigrated to other countries to spread the philosophy and it went on to inform the entire Modernist movement worldwide, particularly in Europe and the United States. The rallying cry of the Bauhaus was “form follows function” and was inspired by the concept of uniting art and industrial design. They wanted to bring art and design to everyday people by making everyday objects both more interesting and more functional. They believed that “less is more’ in everything from colours to furniture, to teapots to architecture. It was a very matter-of-fact response after the overly emotional German Expressionism of the period and a perceived over-the-top flamboyance of Art Deco. And so they scaled back with clean lines and bold, primary colours and though ornamentation was left behind, style definitely was not.

They took advantage of new technological advances in materials and mass production, and exploited the juxtaposition of different and contrasting materials.  The new look was marked by buildings with large expanses of glass windows, tubular steel frames for furnishings, sleek materials like leather, steel and plastic, as well as generally sparse decorations. 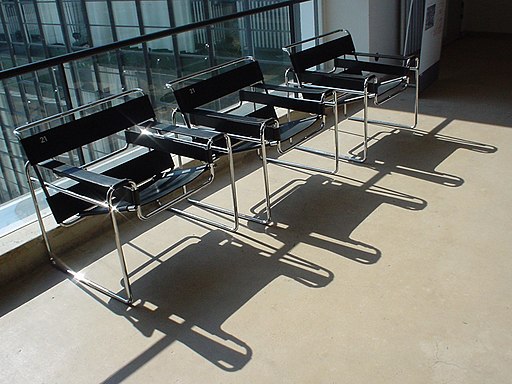 In the US the Mid Century Modern movement was an American reflection of the Bauhaus style, along with the International style (developed in the 1920s and 1930s in Holland, France and Germany, it was characterized by a rejection of all ornament and colour with repetitive modular forms).

Bauhaus also became the cornerstone of the modern Scandinavian design movement that emerged in Denmark, Norway and Sweden in the 1950s. Scandinavian countries, along with Finland and Iceland, were quick to embrace the design philosophy of Bauhaus and make it their own because the love for local materials and functional forms was already embedded in their culture.

If you would like to read more about the Bauhaus and it’s legacy,  Dezeen’s have written an excellent series of articles exploring the school's key figures, projects and influences: https://www.dezeen.com/bauhaus-100/ Thanks Michele, I’m so glad you enjoyed the post! I’m not an expert, but the Mid-Mod style was not an American version of Bauhaus, but rather a development of the original philosophy. Bauhaus was kind of like a bedrock for the whole modernist movement. If you’d like to know more about Bauhaus, I can highly recommend visiting https://www.dezeen.com/bauhaus-100/ They have extensive articles about all aspects of the movement.

Thanks for Great article on Bauhaus! Love all the history; have a question regarding the comparison of Mid-Mod furniture .
Am I to understand that the Mid-Mod style is the American 1950’s version of Bauhaus, just an influence taken from the true German idea of thought?
Thanks for any info.
Michele

Comments will be approved before showing up.

Also in The Inkabilly Blog Less than a year ago, Nikki bought her 1964 ranch home and, in this short time, has been transforming it throughout … playing out a personal battle between colourful kitsch and MCM minimalism … Gwenn, in her own words, is a “mid-century, retro, colours and eclectic stuff lover!” Her home is full of objects with stories, where broken and unloved things are upcycled into beautiful items full of purpose. Olivia and Ed are restoring and reviving their 1958 ranch to it’s original atomic splendour …. and beyond …

+WHAT'S NEW IN THE EMPORIUM!

Drop us a line at info@inkabilly.com

Or catch us on social media:

Inkabilly is husband-and-wife team Lee and Karl. A mid century obsessed couple who've been designing and creating our vintage-inspired homewares, accessories and gifts in our Bristol studio, UK since 2010. We love to mix up our Retro! So in our emporium you will find a happy, eclectic mix of nostalgic and kitsch designs inspired by the 50's, 60's & 70's.